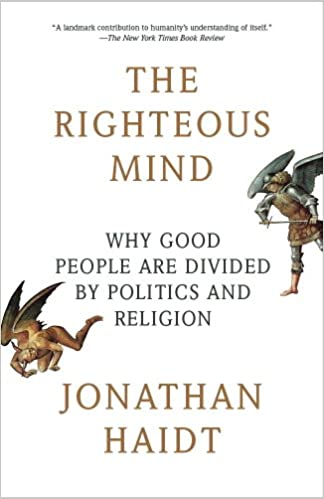 I am currently reading Jonathan Haidt‘s book on a search for the underlying causes of the cultural wars and partisan tribalism. Professor Haidt writes that purpose of his book is to heal some of the misunderstandings between the left and the right:

Our righteous minds made it possible for human beings-but no other animals – to produce large cooperative groups, tribes, and nations without the glue of kinship. But at the same time, our righteous minds guarantee that our cooperative groups will always be cursed by moralistic strife. Some degree of conflict among groups may even be necessary for the health and development of any society. When I was a teenager I wished for world peace, but now I yearn for a world in which competing ideologies are kept in balance, systems of accountability keep us all from getting away with too much, and fewer people believe that righteous ends justify violent means. Not a very romantic wish, but one that we might actually achieve.

The Righteous Mind: Why Good People Are Divided by Politics and Religion, Introduction Haight p xiii

I have to say that so far the book is informative about how the secular left approaches cultural issues. Some of his reasoning is quite amusing. Only an academic could think that it’s possible to so completely remove emotion out of a discussion about a taboo – what he calls “harmless taboo violations” – within one’s own culture. His scenarios become so abstract that one wonders if we are still speaking about human beings and not space aliens.

The author has an interesting take on the age-old question of whether we are able to control our passions with reason.

So now we have three models of the mind. Plato said that reason ought to be the master, even if philosophers are the only ones who can reach a high level of mastery. Hume said that reason is and ought to be the servant of the passions. And Jefferson gives us a third option, in which reason and sentiment are (and ought to be) independent co-rulers, like the emperors of Rome, who divided the empire into eastern and western halves. Who is right?

The author sides with Hume, citing scientific studies showing that people who have had brain damage to their emotional centers (pre-frontal cortex) make poor decisions. “Reasoning requires the passions, ” he concludes. While I am aware that a lack of empathy leads to antisocial behavior (psychopathy), I don’t think one can say definitively that physical damage to one part of the brain can be attributed only to emotions and not to other cognitive functions such as reasoning. I do not believe we know enough about what consciousness is to make such confident statements about causality.

To be fair, the author admits that although it is now believed that emotion is a form of cognition, we still don’t know much about it.

Emotion is a bit harder to define. Emotions were long thought to be dumb and visceral, but beginning in the 1980s, scientists increasingly recognized that emotions were filled with cognition.

…The crucial distinction [between moral judgement and moral reasoning] is really between two different kinds of cognition: intuition and reasoning.

I find it interesting that Professor Haidt calls this emotional part of cognition “the elephant” and the reasoning part of cognition “the rider”. While he says that the rider is servant to the elephant, he is not using words that would indicate this relationship. We think of a beast of burden to be controlled by a rider. And who rides a beast of burden, but a human being? It’s an odd juxtaposition of terminology and definitions.

But, that is not my only question about why he chose the elephant for his metaphor. Let me explain further. Below he gives a rationalization for choosing the elephant:

In the Happiness Hypothesis, I called these two kinds of cognition the rider (controlled processes, including “reasoning-why”) and the elephant (automatic processes, including emotion, intuition, and all forms of “seeing-that”). I chose an elephant rather than a horse because elephants are so much bigger-and smarter-than horses.

And, although he says that emotions are not dumb and elephants are smarter than a horse, they do throw their weight around – a bit like a brutish bully.

Automatic processes run the human mind, just as they have been running animal minds for 500 million years, so they’re very good at what they do, like software that has been improved through thousands of product cycles. When human beings evolved the capacity for language and reasoning at some point in the last million years, the brain did not rewire itself to hand over the reins to a new and inexperienced charioteer. Rather, the rider (language-based reasoning) evolved because it did something useful for the elephant.

So, my point is that if the book, whose stated purpose is to heal the political divide, why did the author chose the mascot (elephant) of one of those parties (GOP) to represent the oldest, non-intellectual part of the brain?

Perhaps Professor Haidt really chose an elephant because he likes elephants and thinks they are a better metaphor for his thesis than a horse, as I quoted him above. But, then, why mention the horse and not the association with the GOP? It seems an odd deflection.

So, am I the one overthinking this? Maybe. But, maybe I wouldn’t have thought about the why of Professor Haidt’s choice of the elephant IF he hadn’t sandwiched these thoughts between “harmless taboo violations” on one side and an admission that he is appealing to our “elephant” to make his case on the other side. And, further, after he makes this appeal to us by being honest, he then begins a discussion of psychological priming using words (called Affective Priming).

I could be very wrong, of course. It could just be that the author is a victim of another well known psychological phenomena known as a Freudian Slip. Perhaps Professor Haidt is unaware of his own elephant’s feelings about the GOP. Or maybe he is indeed aware that the connection is there and will mention the GOP and elephants later on in the book. I want to be fair, so I will update this post if I come across it.

In any event, I think I like Professor Haidt even if he is a bit condescending towards the elephants. While I disagree with him that science can be a firm foundation for building a successful societal system and I think that some of his conclusions are a bit premature considering our understanding of the brain is still in its infancy, I do agree with him that it would do us all some good to try to understand each other. We should all have the same goal – to find some way to heal this terrible cultural and political divide without violence. That much, we can agree on.

In 1999, summing up his work since and including Outside, Bowie said “Perhaps the one through-line between some of the stuff in Outside and the coming millennium is this new Pagan worship, this whole search for a new spiritual life that’s going on. Because of the way we’ve demolished the idea of God with that triumvirate at the beginning of the century, Nietzsche, Einstein, and Freud. They really demolished everything we believed. ‘Time bends, God is dead, the inner-self is made of many personalities’… wow, where the f*** are we? […] I wonder if we have realized that the only thing we could create as ‘God’ was the hydrogen bomb and that the fall-out from the realization that as gods we can only seem to produce disaster is people trying to find some spiritual bonding and universality with a real nurtured inner-life. But there is also this positivism that you find now which really wasn’t there at the end of the last century. Then, the general catch phrase among the artistic and literary community was that it was the end of the world. They really felt that in 1899 there was nothing else, that only complete disaster could follow. It isn’t like that now. We may be a little wary or jittery about what’s around the corner, but there’s no feeling of everything’s going to end in the year 2000. Instead, there’s almost a celebratory feeling of ‘right, at least we can get cracking and really pull it all together.'” Although he ruefully noted, “I think it’ll all fizzle out on January the 1st. Getting up and deciding what you’re going to have for breakfast, that’ll be the most exciting thing to do in the New Age.” wikipedia – outside 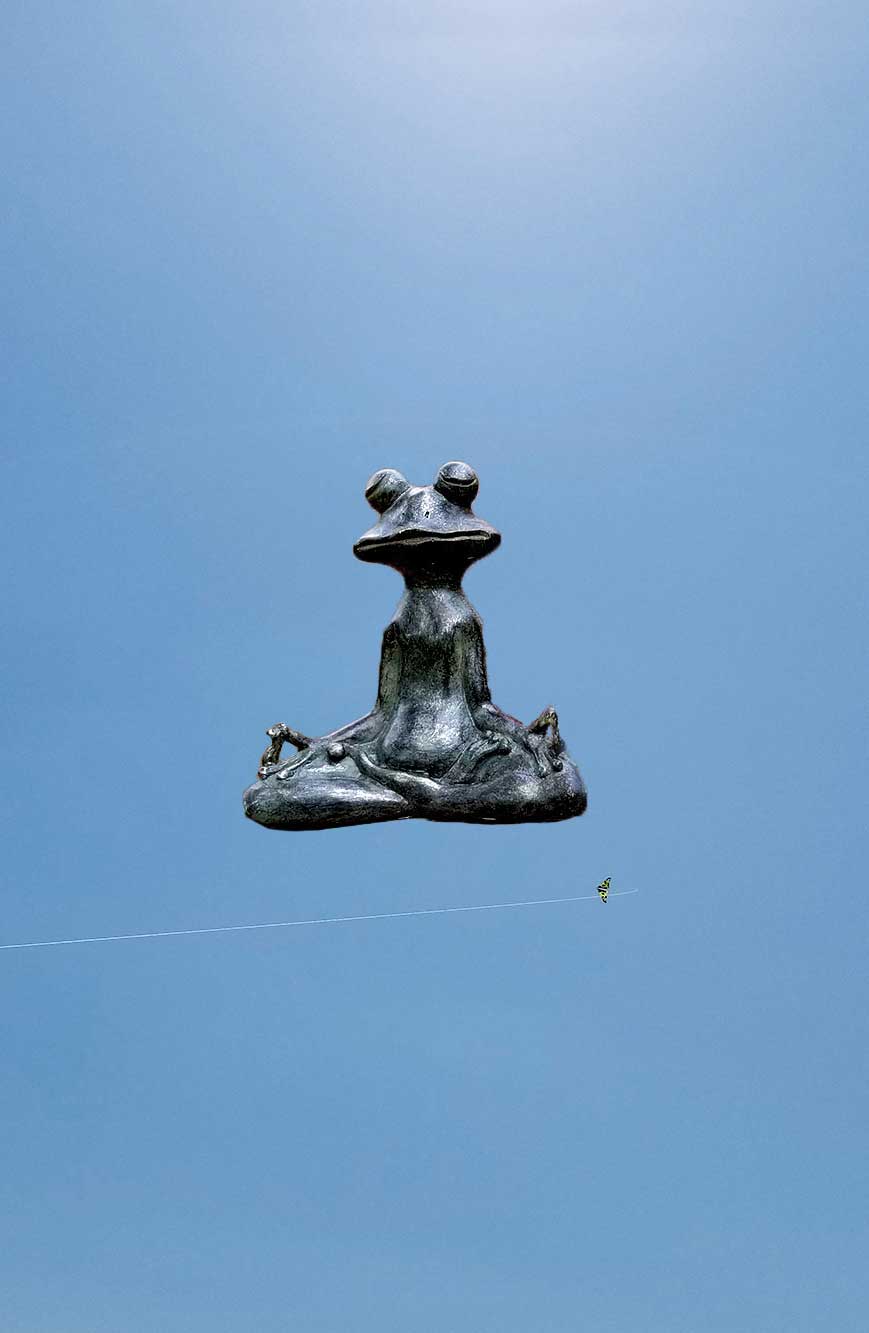